The Tale of Two Ogdens: East Bench vs. East Central

In 2014 I wrote about the disparity between two of Ogden’s most prominent neighborhoods, the venerated East Bench and the heretofore notorious East Central now  co-branded as Trolley District.  At that time, with the market beginning to heal from the deep wounds of the 2008-2012 real estate depression, there were some early signs of adjustment between the two neighborhoods. Today we revisit this topic with some new charts to illustrate the point.  Yesteryear’s charts consumed a lot of data and time.  This go around I wanted to illustrate the differences through the lens of similar homes.  So, for this experiment I grabbed specimens of 1920’s era bungalow homes.  These homes were “cookie cutter” for their day and typically consist of brick construction, prairie school roof lines, and projecting front porches.  Thus, they provide a convenient way to compare values across Ogden’s most celebrated dividing line: Harrison Blvd.  So, let us begin. Our first chart shows two trend lines.  The blue line represents $/SQFT for bungalows in Ogden’s Trolley District.  The red line represents those same style of homes on Ogden’s East Bench.  Both show trends in similar directions.  But what is most interesting is how the lines converge and diverge periodically.  At points in 2015, 2017 and 2021 these types of homes were valued the same in both neighborhoods.  Will these lines converge again? 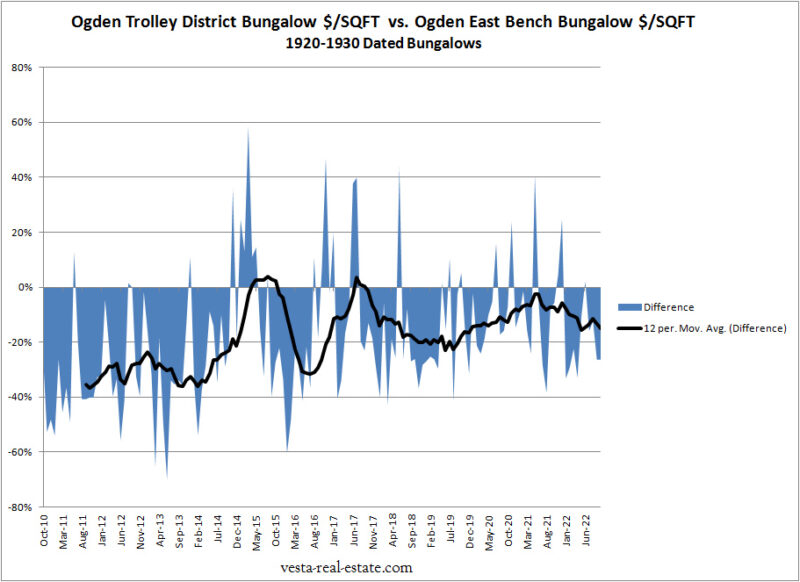 Our second graph here shows the % difference between the $/SQFT values of homes in the two neighborhoods.  What we see here is the proportional difference in values.  The black trend line tells an interesting story. In 2010 Trolley District values were lagging up to 40% behind their East Bench peers.  That difference has steadily eroded with the current East Bench premium trending at only 15%.  If this long term trend continues, Trolley District bungalows may exceed the value of their East Bench counterparts sometime in the next several years.

The market is dynamic and always changing.  While the gentrification of the Trolley District has been slow, it has been consistent. It will be exciting to watch and see what the future has in store for two of Ogden’s coolest neighborhoods.  And while we are waiting around watching, if you or anyone you know needs help buying, selling, or leasing their home, be sure to give me a call.  I am here to help – 801-390-1480.